2019 was a difficult year for UK productivity as negative results in the first half of the year were succeeded by two very slow, if marginally positive, quarters1. In light of the economic disruption resulting from the coronavirus pandemic, it’s hard to see 2020 as any kind of real turning point, despite the significant fiscal stimulus packages announced in March2.

Looking at the dates, 2008 can be considered the point of detonation, while the fallout continues to smoulder 10 years on. Explaining this phenomenon has preoccupied economists, politicians and business leaders for the duration of the period.

On the one hand, the Financial Services industry accounts for some of the decline as institutions handled less cash with the same number of staff and the same fixed costs4. Yet, the phenomenon also spread to other areas of the economy, namely the manufacturing sector which experienced a 3.5 percentage point decline in average annual productivity growth from ‘09 to ‘15 (+4.3% per year down to +0.8% per year)5.

Most commentators explain the drop in manufacturing productivity by highlighting the growth in low-cost, low-skilled labour to the detriment of capital investments in equipment and digital innovation. The upside is a record rate of employment, however, the downside is a decade of lost productivity growth despite significant advances in technology and digitisation6.

The shift from innovation to labour intensity as the basis of the UK economy is often explained as a consequence of lost confidence and general uncertainty, exacerbated in recent times by geo-political tensions, disruption to global supply chains and, of course, Brexit7. However, an issue of such complexity should not be diagnosed in these general terms; a view from 35,000 feet helps describe the lay of the land, however, it fails to understand what’s happening on the ground.

To turn the discussion in a different direction, UEP has partnered with Roland Berger in search of a new approach to the productivity puzzle. To begin, we aim to understand the specific challenges facing employers and workers in individual organisations, whether that’s access to skilled labour, adoption of tech and automation, investment in R&D or improved adoption of operational excellence and Lean methodologies across manufacturers and their supply chains.

To contribute, all you need do is complete our 10-minute survey

. In return you will receive the full report, and an option to review the report in-depth with one of our practitioners. 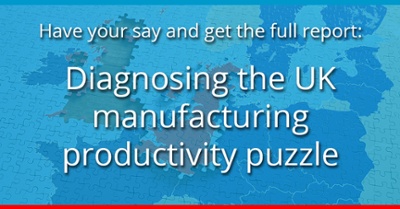 To improve productivity and recover will take a concerted effort to design and execute innovative, practical solutions and thrust the UK economy into a new productivity boom.

If happy employees are productive employees, how do you make them happy?

Please fill in the form below and a member of our team will respond to you shortly.

By submitting this form you agree that we may send you our newsletter, you can opt-out at any time. Click here to view our privacy policy.